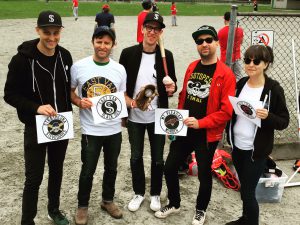 I cradled the baseball in my hand, staring down the throw line into the catcher’s glove. I imagined the perfect sizzler releasing from my fingertips, right into the mitt, burning the catcher’s palm. I glanced around, feeling the pressure. It wasn’t the same kind of nervous anticipation the members of the Mt. Pleasant Murder and the Railtown Spikers were feeling for their first game, watching from behind sunglasses in their dugouts on either side of the sandlot. This was a different kind of pressure. I was throwing out the ceremonial first pitch on opening weekend of the brand new East Vancouver Baseball League (EVBL).

Co-founder Justin Banal from the Isotopes Punk Rock Baseball Club offered me a cold can of Postmark Blonde, brewed about four blocks away. I looked at my watch. It was two minutes past noon on Saturday. He leaned in and gave me some words of encouragement for the pitch.

“Just don’t 50 Cent it.” Excuse me? “Rapper 50 Cent did a ceremonial pitch for the Mets and threw it to first base”. Oh… OK. Just before I strode out to the non-existent pitcher’s mound, another skinny punk in an East Van Murder uniform walked up. “Don’t Carly Rae Jepsen it, dude.” It turns out that Mission’s own “Call Me Maybe” star attempted to throw out a pitch for the Tampa Bay Rays and literally dropped the ball. Michael Jordan, President Obama, and even pitching legend Nolan Ryan have all completely blown their ceremonial pitches.

The PA crackled to life. It was a guitar amp with a RadioShack microphone plugged into it. EVBL co-director Sean Elbe introduced me.

“Ladies and gentlemen, please welcome former lead singer of the Smugglers, current beer league goalie, and author of The Lonely End of the Rink, to throw out our first pitch!” A light smattering of confused applause followed. The heat was on. I wound up.

The founders of the EVBL, a bunch of baseball-obsessed punk rockers, are living out their own Field of Dreams-meets-The Bad News Bears baseball fantasy, bringing a lost era of baseball back from the dead. They’ve built the EVBL from the sand up with a very specific heritage-style design. They built it, and the players came. Those players just have to play by the EVBL’s rules. The EVBL maintains complete artistic and aesthetic control over the teams in the league, right down to the logos. EVBL merchandise is already a hot property, and the league, for this year anyway, is full.

Banal explains the concept. “This city is really good for a lot of things – street hockey, soft ball – but there was no one playing real baseball for fun.” Co-founder Court Overgaauw, of the East Van Black Sox, continues. “At a certain point, many of us who grew up playing real baseball got turned away or off from the sport of a variety of reasons. This league gives us the opportunity to play the game the way it should be played.” And what is real baseball? Think hard balls pitched overhand against wooden bats.

Besides the Isotopes, the league is heavy with members of the local arts community, specifically of the punk rock variety: members of the B-Lines, the Courtneys, Nervous Talk, the Tranzmitors, the Parallels, Uptights and more all suit up, but true to the EVBL word, this ain’t ultimate Frisbee. No shorts allowed.

“Shorts are just not appropriate for baseball”, says Overgaauw. Really? “We’re serious,” says Banal. “You don’t wear shorts in baseball.” Luckily, the rule doesn’t extend to fans watching the games down at the sandlot in Strathcona Park, southwest diamond, corner of Hawks and Malkin. Games are most Saturdays through August.

I let the ball fly from my right hand and watched it smack into the catcher’s glove. In an instant, I managed to achieve what I never could as lead singer of the Smugglers for 17 years: perfect pitch. PLAY BALL!