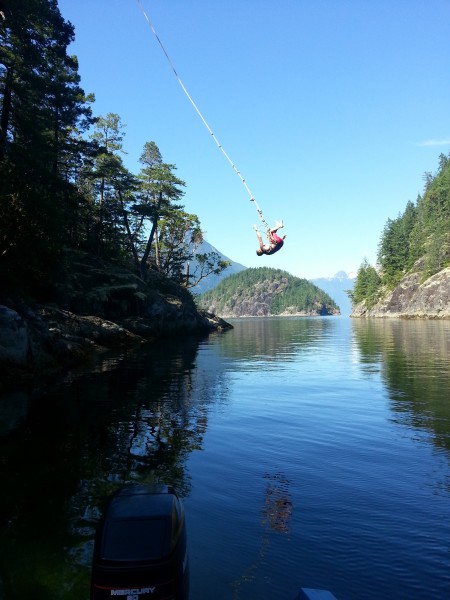 Have you ever had a place that you love threatened? Have you had a favourite corner of the world changed by the onset of industry? Have you rallied around that place to try and save it? Is that even possible anymore? Was it ever?

When I was first contacted by the non-profit society whose mission is to “Save Desolation Sound,” my first question was, “from what?”

Their answer was this: a gravel quarry has been proposed a few kilometres northeast of the wild waters and forests of the Desolation Sound Provincial Marine Park. The company is Lehigh Hanson Materials, based in Alberta, which is in turn owned by a German mega-company that is one of the largest cement makers in the world.

It sounds preposterous. This is an area that was turned into one of the largest marine parks on the west coast of Canada because it is so spectacularly beautiful, an oceanic paradise that boasts the warmest ocean water north of the Gulf of Mexico, the steepest drops from mountain peak to ocean bottom in North America, and ocean mammals that include orcas, dolphins, humpback whales, porpoises, seals and sea lions. The marine park boasts over 60 kilometres of undeveloped shoreline, all of it boat-access-only, just 200 kilometres north of us in Vancouver, but seemingly a world away.

I’m also completely biased. My family has owned a small pocket of land within Desolation Sound for 40 years. I’ve written a book about the place. I love it dearly, like a member of the family. I have a vested, admittedly NIMBY interest to hopefully (and possibly naively) try to protect its wildness. I’m also aware it is not an “untouched wilderness.” Like most of the province, before it became a park, the entire area was logged at least twice, but the trees have grown back and nature has beautifully reclaimed the parkland.

To be clear: the gravel quarry proposal site is not within the park, but close enough that it is presumed to be visible and audible from within the park. Noise, scarring of the mountainside, light pollution, and heavy barge and freighter traffic are all possible threats to the park, the community, tourism, and the environment (the gravel barges will have to pass through Desolation Sound in order to head south).

To be clearer: I also get that all those kayakers who love to paddle the park, as well as my family, drive cars on paved roads made from gravel to get to our launching point for Desolation Sound. I understand the need for industry in our society. What I don’t understand is why a quarry is proposed in such a special area that many thought had recovered from industry for the last time.

Russell Hollingsworth is one of Vancouver’s leading architects and one of the founders of the Save Desolation Sound Society. He agrees with the inappropriateness of the proposed location of the quarry: “The natural beauty and long-term economic value of this area are worth far more than the short-term gains of gravel extraction. A gravel pit in Desolation Sound is an inappropriate and environmentally unsustainable project for this area.”

Lehigh Hanson’s application to conduct bore-hole testing has been approved by the province, and will begin after Labour Day.

According to a June press release from Lehigh Hanson, nothing is –ahem– set in stone: “Lehigh Hanson does not have any specific plans for a mining operation at present and fully understands that any such decision would be subject to respectful involvement of First Nations, dialogue with communities and stakeholders, and consideration of environmental stewardship. As with all of our operations, Lehigh Hanson is committed to performing these exploratory activities in a safe and environmentally responsible manner and will seek every opportunity to minimize disruption to the area.”

Uh huh. If you know what it’s like to have the place you love come under threat, you can add your voice to Save Desolation Sound. The society has set up a petition at SaveDesolationSound.com/join-us.