BC declares war on wolves 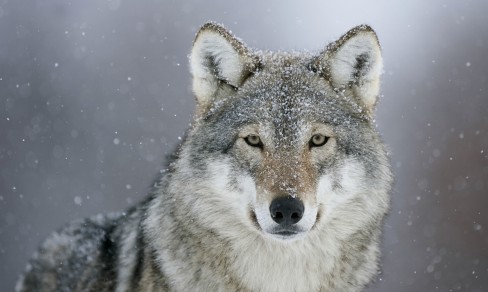 The slogan was as unlikely as the location it was chanted in, over and over, by howling teens, as instructed by their on-stage leader of the pack. If you were at Miley Cyrus’s sold out Queen Elizabeth Theatre concert last month, or heard about it after the fact, you’ll likely be aware that the American pop star once again put BC’s controversial wolf cull centre stage, literally, by illuminating her backdrop with the hashtag #savebcwolves. Cyrus then filmed her audience shouting the afore-quoted phrase. She shared the video with her millions of followers from around the world.

What Cyrus may now wonder, as well as other wolf cull-opponents like Pacific Wild, a conservation group that has gathered over 200,000 signatures in opposition, is where to point the protest? Is it towards the ongoing five-year wolf cull in the South Peace and South Selkirk regions of BC, designed to protect rapidly dwindling woodland caribou populations? Last year’s cull wiped out 180 wolves, all brought down by sniper fire from helicopters, with many more wolves to drop this year and all the way through to 2020.

Or is it the new proposal (found by chance by a CBC producer in Kelowna) that was quietly rolled out by the provincial government in November? That proposal, if approved, recommends unlimited, year-round, completely open season, no bag limit hunting of wolves in the Peace Region. This is up from the previously allowed bag limit of three wolves per year per hunter. Why? The rationale in the proposal is as follows: “verbal reports from many stakeholders and First Nations…suggest that the wolf population in the Northeast appears to be very high, relative to levels in recent history. Increased wolf populations can have negative impacts on wild ungulates [deer, moose, elk, caribou] as well as cattle.”

If this all rings familiar to you, it’s because European settlers have been at war with the wolf ever since we set foot on this continent. Time and time again we blame the wolf for just about everything imaginable, yet time and time again critics and evidence will argue otherwise. In Alberta, the provincial government engaged in a wolf cull that began back in 2006, resulting in the destruction of nearly 1,000 wolves. The caribou population they were trying to save has stabilized, but not grown. It raises the ethical question of human beings playing God in nature: do we have the right to kill one species to save another, when the real reason woodland caribou populations are in a free fall is because of lack of habitat due to our encroachment through everything from highways to resorts to mining to deforestation to snowmobile trails?

Over time, it’s always remarkable how much changes, and how much remains the same. In other words, the BC wolf cull is misguided Canadian history repeating itself. In 1948, the federal government assigned a naturalist and soon-to-be author named Farley Mowat to the far north to investigate – surprise!– dwindling caribou populations, to see if the wolf was to blame. Mowat’s findings were negative, he was fired, and the wolf cull proceeded. I’ll leave you with Farley Mowat’s conclusions from his wolf study almost 70 years ago. It’s decidedly more eloquent than Cyrus’s 2015 howl, but just as biting:

“We have doomed the wolf not for what it is but for what we deliberately and mistakenly perceive it to be: the mythologized epitome of a savage, ruthless killer—which is, in reality, not more than the reflected image of ourselves. We have made it the scapewolf for our own sins.”