The perils of solo parenting 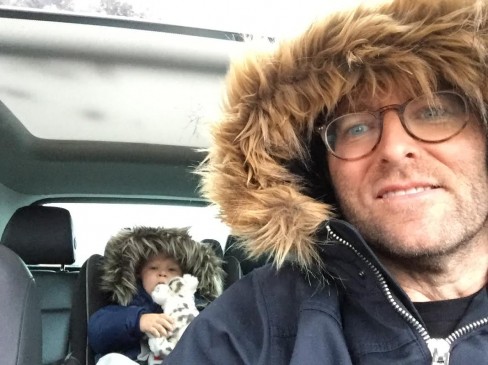 You’re late…again. You’re rushing out the door, you’re trying to remember everything you need, and you’re stressed out. That’s when the person you’re with shits himself.

Such a sticky situation is just one of the many challenges of solo parenting, something I experienced with my toddler for most of the month of October, 2015.

I’m the proud husband to a successful touring musician. This fall season alone, my wife toured Japan, Europe, and Quebec, all while the wee boy and I remained home. It’s a bizarro role reversal for me: for 17 years of my life, I was the cool guy hopping into the van or the jet, zipping off to some exotic port of call in my rock band, hardly understanding or caring for the feelings of the people left at home. Now I’m the one looking longingly out the front window, while my wife climbs into the waiting cab, headed to the airport.

Within minutes of my wife’s departure, my respect for single parents skyrocketed as I grabbed for my toddler while he pranced along a windowsill. And before I go any further: there’s a big difference between “solo parenting” and “single parenting”. Solo parenting means your partner – the gods be willing – will return to resume their role. Single parenting means you’re on your own, just you and the kid, a commitment far greater than my temporary solo situation. I work with a wonderful single mom at the CBC, and my reverence for her has grown ten-fold.

Here are just a few of the challenges I faced as days grew into weeks while solo parenting:

When the hell do you have a shower?

Having not bathed in days and reeking like a dumpster behind a fish restaurant, I found myself Googling various mommy blogs, typing in that exact question. Some of the mommies suggested that you simply bring your toddler into the shower with you. But when your son yanks on your penis like it’s the ripcord to a parachute, that gets old quickly. One mommy suggested putting the baby monitor in the living room and the receiver in the shower. Was that a sly attempt to electrocute daddy?! In the end, I basically didn’t bathe for a month.

How to do you avoid packing like you’re out to conquer Everest for the simplest of day trips?

The sheer amount of stuff I needed to leave the house had me Googling “sherpa service Vancouver?” Not only was I weighed down with diapers, wipes, water and milk bottles, extra clothing, a bib, a rubber stick-on plate, cutlery, various snacks in Tupperware of tiny shapes, a haberdashery of hats for all manner of weather – and yes, a few cold ones for Dada – my toddler insisted on bringing every stuffed animal he owns every time we left the house. Dada was forced to make arm space for Snow Leopard, Owl, Monkey, Turtle, Hockey Man, and Hockey Duck. They all simply had to make the trek to London Drugs.

How do you avoid judgment?

My son mispronounces “cookie”. Instead, he calls them “doobies”. He constantly asks for them, everywhere we go. “Dada! Big doobie for Josh?” In an effort to effectively and easily communicate with my son, I answer, “Joshua, when we get home you can have a small doobie”. The other parents at the playground glare at me.

I would be remiss without saluting the grandparents, my sister, and our friends for their help. My son and I did indeed bond wonderfully, but allow me to admit this: when my wife finally stepped out of that cab, I practically shit myself with relief.

Read more of my Vancouver Shakedown column for the Westender here.