Changes at the CBC and spring tour dates 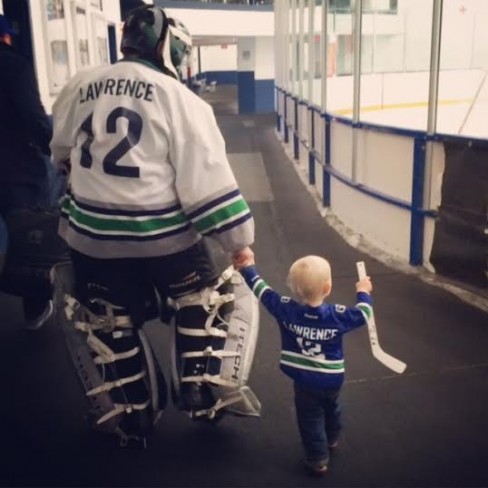 The Lonely End of the Rink isn't so lonely anymore.

Hopes this finds you happy and healthy this spring of 2015! Much like the changing of the seasons, it’s a period of transition for me, especially at the CBC.

For the past ten years, I hosted a four-hour daily live show, Monday to Friday, on CBC Radio 3. I primarily played Canadian independent music, falling mostly under the umbrella of “indie rock”. It was an incredible experience to channel my DJ heroes like Wolfman Jack, Alan Freed, David Wisdom, and Nardwuar, while simultaneously broadcasting live to North America on SiriusXM satellite radio and streaming to the world on cbcmusic.ca.

Like many things at the CBC these days, Radio 3 is going through changes. The big one happened at the end of March, when we ended our live hosting on the network after a decade. The final broadcasting day, Friday March 27, 2015, was extremely fun but also very emotional. Ten years is a long time, and the audience and community that has grown out of Radio 3 is second to none. I’m proud to call many of the international listeners, who engaged with me on air through many means on a daily basis, my friends. Thanks again to all for the kind wishes for the future.

And the future is… now! I’m still at the CBC, still working with Radio 3 (which continues!) and CBC Music. You’re still hear me in recorded segments on Radio 3, and on various programs on CBC Radio 1 and Radio 2 doing what I always do: promoting new Canadian music. You’ll also see me all over CBC Music’s social media feeds and on regional CBC television. I also still host the CBC Radio 3 Podcast, and will be guest hosting on CBC Radio 1 this summer.

When it comes to writing, I’ve also proudly been writing a local Vancouver column for The Westender, the city’s longest-running entertainment weekly. The feature is called Vancouver Shakedown, and is all about the culture, society, and zeitgeist of this Terminal City. I’ve already caught roses and thorns while covering such topics as weather bragging, the whales still in captivity at the aquarium, attempted stroller theft, the new “heron cam”, and the infamous West Coast social condition known as “The BC Bail”.

I also continue to plunder away at my third book. It’s still a rock ‘n’ roll story, a warts-and-all tour diary expose of my many years on the road in The Smugglers. Sometimes the process is fun, other times embarrassing, and sometimes a struggle, but I’m determined to finish it for both my sake and for your hopeful enjoyment.

As for hockey, my team the Flying Vees had our best season ever, going 17-5-1. Sadly, we lost in the playoffs, but my hockey-obsessed son Joshua was able to come to some games and loved it.

When it comes to live events, I’m about to enter a very busy spring season of appearances in and around BC and Ontario. All the dates are listed below. If you’re around, it’ll be fantastic to see you as always.

Thanks for the support, hope to see somewhere this spring or summer,