Free the whales: my opinion on the Vancouver Aquarium’s continued practice of keeping and breeding whales 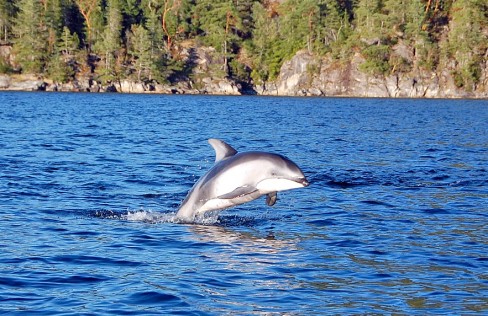 Even when I was a little kid, I knew keeping whales in captivity at the Vancouver Aquarium was wrong. Despite my misgivings, I’d still scramble and jockey to sit in the “splash zone”, hoping the cold salt water from the killer whale and dolphin shows would slosh over the glass and soak me.

It was when the magnificent bodies of those gigantic mammals exploded out of the water at their trainers’ behest, all for a reward of a meager mouthful of dead herring, when I felt the stab of guilt. It was painfully obvious that the animals were simply way too big for their tank.

“Look at the dolphins, they love it!” squealed one sopping kid, as the dolphins bobbed and leapt across the surface of their stage. “They’re smiling!”

Such is the curse of the dolphin. Just like belugas and, to a lesser extent the orcas, when opened, their mouths curve up at the jaw, giving the false impression they’re perpetually “smiling”, as if a visit to a Yaletown botox clinic had gone permanently wrong.

That “smile” also gives the appearance, especially to impressionable children, that these incredibly smart mammals actually somehow enjoy being held prisoner in aquatic cellblocks, where they are forced to do tricks for dead fish. You know in your gut that nothing could be further from the truth.

How is it even a fathomable reality, that decades after my childhood guilt, we still allow the Vancouver Aquarium to imprison cetaceans (whales, dolphins, and porpoises), in tanks hardly larger than an Olympic swimming pool? Our mayor has publicly spoken against our incarceration of whales. Last summer, our parks board voted against further captive breeding (what a disgusting phrase), but since the civic election, that ban has been sunk.

The aquarium justifies the confinement of cetaceans as research, and yet their website still clearly offers “dolphin shows” and “beluga shows” (to their credit the Vancouver Aquarium no longer keep orcas). The “shows” might well be more on the instructional side than the old killer whale splash zone antics of yore, but they are still marketed as performances, and you just know it all comes down to money: the cetaceans are literally the aquarium’s big ticket items.

To make matters worse, the aquarium has imminent plans to expand, which means even more loaner beluga whales will return to Vancouver. One such beluga was on loan for breeding at SeaWorld Orlando. Tragically, that unfortunate whale/sperm bank died from an infection caused by a broken jaw, which apparently came from some sort of altercation with other belugas. Excuse me?

According to the Vancouver Aquarium, the cetaceans in their command have been deemed “non-releasable by government authorities”. Even if originally rescued, these beautiful mammals do not deserve to be kept as pets and show pieces. They are mostly migratory, highly social, and keenly intelligent. In their natural habitat, most beluga whales are seasonally programmed to migrate thousands of kilometres, spending social time in pods of anywhere from three whales to groups of thousands. Think about a naturally migratory mammal in a fish tank. They must go crazy.

All that said, you can add my voice to the long list of critics calling upon the Vancouver Aquarium to end their long-standing, unethical, and hypocritical captivity of whales, dolphins and porpoises, and to release them into their natural habitat.

If these intuitive creatures cannot survive in the wild after release as the Aquarium predicts, they would at the very least taste freedom, something we all desire.

And you would finally know in your gut that for once, that “smile” would be genuine.