Casey and Finnegan, CBC Beetle Roadtrip, and even Bryan Adams: the top six moments of the greatest summer ever! 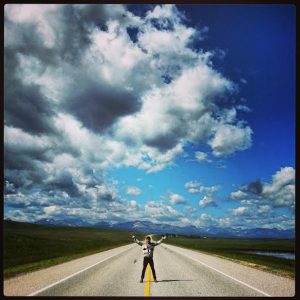 The glorious foothills of the Rocky Mountains, one of the best views in Canada.

Well that was one heck  of a summer; the greatest of my life so far, hands down. It was so good that I thought I had better make a Top 5 List, but couldn’t fit it into 5 so here’s 6.  Thanks to everyone I crossed paths with to make it so memorable. 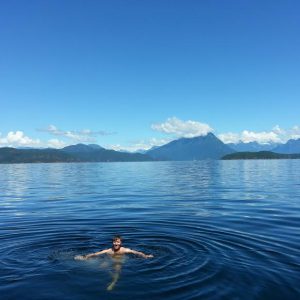 Swimming in 400 feet deep warm water in the middle of Desolation Sound in July.

6. Desolation Sound, BC. It was a challenge to actually get to the ol’ family cabin this summer, but the times we did were glorious. Our boat Big Buck$ roared us around the Sound. In each place the swimming was incredible. We also had fun this year at the Lund Shellfish Festival, the Summer Muse in Powell River, and the Sunshine Coast Festival of the Written Arts in Sechelt. 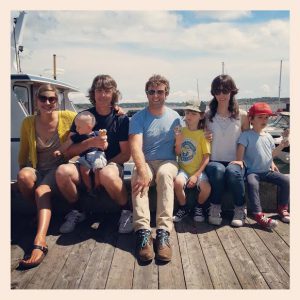 The Murphy-Mendozas and the Lawrence-Barbers on a summer day in Charlottetown harbour.

5. Prince Edward Island. I had the good fortune to be on this summer paradise of an island three times this season! What an amazing city and province that knows how to do summer right. Everywhere we turned we ran into friendly musicians, and we had a fine time staying up in Stanhope in Prince Edward Island National Park. Best eating: Receiver Coffee, Terra Rouge, Richard’s Fresh Seafood. Best drinking: PEI Brewing Company. Thanks to the Kelly-Roberts family! 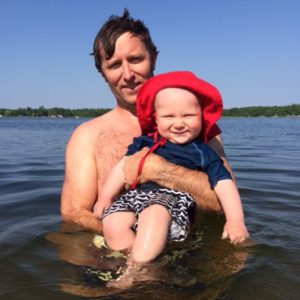 4. Prince Edward County. Not to be confused with PEI, PEC is also on an island, but located on the shores on Lake Ontario. It’s where my in-laws have a lovely county home in Wellington (aka “Wellsies”) which is where my wife and son and I spent a beautiful, sunny Canada Day during a short break in the CBC Beetle Roadtrip. We did some perfect family swimming at North Beach, drank Beau’s beer and enjoyed the great little cafes and restaurants that dot the county, like the Tall Poppy, the PEC Food Truck, and East and Main. 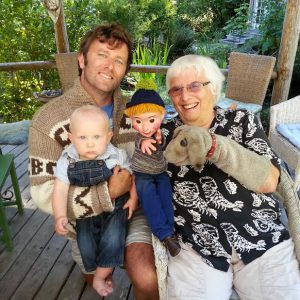 3. Meeting Casey and Finnegan on Josh’s first birthday. Somehow, neither my wife or I had ever been to Hornby Island, BC. Thanks to the Hornby Island Festival, we made it this summer and had a fantastic time. I did readings from both of my books and Jill sang some songs. After the event, we were approached by a woman named Judith Lawrence, who told us she used to work for the CBC. When Jill enquired further, she then dropped the nostalgic bombshell that she was THEE Judith Lawrence (no relation), the legendary puppeteer who created, animated, and voiced Casey and Finnegan from Mr. Dressup! And that she still has the original puppets in her possession… there on Hornby Island! The next day just happened to be our son Joshua’s first birthday, so Judith actually brought Casey and Finnegan over to where we were staying and let us meet them. For a kid who grew up watching Mr. Dressup religiously every morning, Monday to Friday, it was a WAY bigger deal for me than Josh. Thanks to Judith, Deb and Drew McVittie, and the Pratts for a GREAT time. What an island! 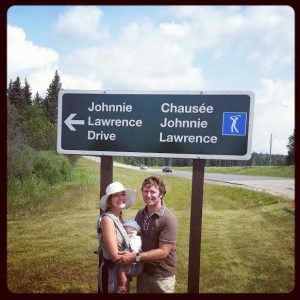 2. Johnnie Lawrence Drive. For over 40 years, my grandfather Johnnie Lawrence was an exceptional pro-golfer at the Clear Lake Golf Course in Riding Mountain National Park, Manitoba. Over the course of those many decades, he created an incredible legacy, teaching thousands of people from multiple generations how to golf. He left a lasting impression on his students, as I still run into them all over the world who want to tell me all about my grandfather and his perfect swing. This summer, Parks Canada and the Clear Lake Golf Course honoured the memory of my grandfather and the Lawrence family by officially naming the road that leads up to the golf course “Johnnie Lawrence Drive” with a ceremony and parade in August. My family is deeply humbled to have a road named for our grandfather in a Canadian national park. 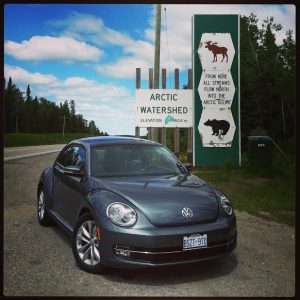 I drove this little car through all ten provinces this summer. It was the trip of a lifetime.

1. The CBC Beetle Roadtrip. I consider myself fortunate to have visited all ten Canadian provinces, but I’ve done it slowly, ticking off the visits to each one over the course of my life. Never have I had the opportunity to drive straight through all of them, coast to coast, until this past summer. We started in Cape Spear, Newfoundland, and drove the CBC Beetle all the way to Mile Zero in Victoria. Along the way we met up with some of the finest musicians in Canada to film them performing their songs in iconic Canadian locations. It was truly an epic voyage through the most stunning country in the world and one of the greatest experiences of my life, which I implore you to do as well. Thanks to Bryan Ward, Chris Kelly, Josh Huculiak, Emma Godmere, CBC Music, and VW Canada for making it happen. You can see all the videos and photos here, or watch this finale recap of the entire trip in a couple of minutes: 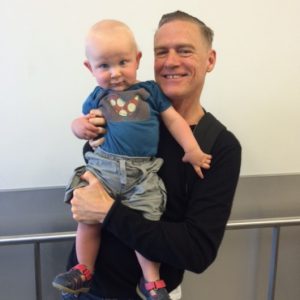 I wasn’t even present for this so I can’t really include it in my favourite moments, but the story is pretty surreal. My wife Jill Barber was on her way to play a festival in Quebec City and ended up sitting next to Bryan Adams on the flight, who actually requested to sit next to her! He was a great guy, shared some new songs with Jill, held Joshua, and came to Jill’s show in Quebec City that night. And to think he used to wash the dishes at the Tomahawk in North Vancouver!

What was YOUR favourite moment of your summer? Comment below!