PUP video “Guilt Trip”: the weird story of how I was cast as the crooked cop 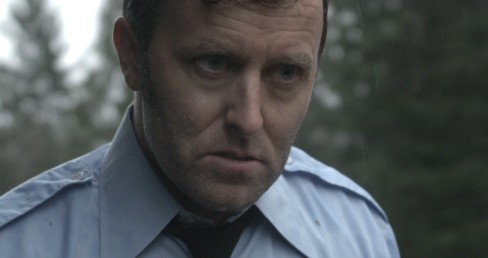 In case you haven’t heard of PUP, let me prepare you: they are a high voltage, high impact, highly spirited punk rock band from Toronto. They put out one of the most electrifying albums of last year, and one of the best debuts in many years. So, consider me a fan who plays this band regularly on CBC Radio 3. 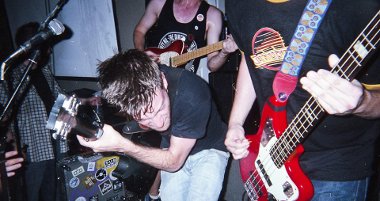 This past January, my wife and son and I were headed to brunch on a gloomy, wintery  Sunday morning to a restaurant I NEVER want to go to but my wife loves. I was desperately hung over. We were trudging along an industrial stretch of dullness in East Vancouver. Out of the corner of my eye, I saw a printed sign taped to a glass doorway. “AUDITIONS FOR PUP Music Video”. 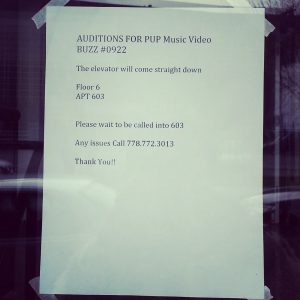 Calling all pups... and one old guy.

I squinted and belched. “There’s no way it could be the same band…” but I snapped a photo and Instagrammed / tweeted it anyway. PUP confirmed seconds later it was indeed an audition for their next video, to which I jokingly replied “do you have a role for a semi-drunk, semi-hungover, hairy, smelly, new dad in his really early 40s?”

The band replied “can you play a convincing police officer?”

At the very moment we arrived at the restaurant that I didn’t want to go to, a burly cop was dragging in a woman who had just dined and dashed. I took it as a sign. I said YES.

Instagramly, PUP put me in touch with the director and producer (who coincidentally were also having brunch at the very same restaurant, also witnessing the police incident) and BOOM. I was cast as a not-so-burly but very evil cop in a video that fictitiously traces PUP’s origins back to their childhood in a dark and wet music video cross between Stand By Me and The River’s Edge. 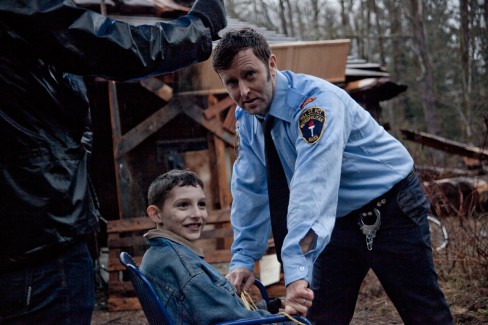 On the set in the sleet between takes with actor Finn Wolfhard. Photo by John Lee.

The video was filmed mostly in a lumberyard in Brackendale BC just outside of Squamish on an shivering and soggy, classic West Coast winter weekend. For many of my “shots” I was thrown into puddles of mud and slush.

The spritely actors who play the youthful version of PUP are all excellent. I was the most “hands on” (literally) with the amazing Finn Wolfhard who plays the badass bully and (SPOILER ALERT) eventual lead singer. 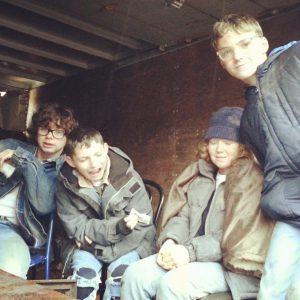 The four actors who played young PUP keeping warm in the dressing room: the back of a truck with a wood burning pot bellied stove.

The video is co-directed by Chandler Levack and Jeremy Schaulin-Rioux and produced by Dan Code. Thanks to everyone in the production crew for involving me and treating me so well, and to PUP for actually responding to that instagram photo. And thanks also to my wife, who dragged my sorry, hungover butt past that audition sign in the first place. Funny how things work out sometimes. 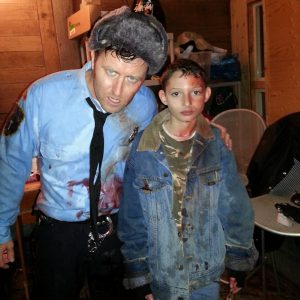 The aftermath: whose blood IS that?!?

Let me know what you think in the comments below!