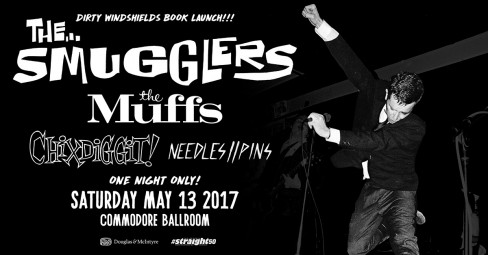 Hope this finds you well in 2017! There’s plenty aboot on my front and I’m eager to share the details with you.
At long last and much writing / deleting / re-writing and very late nights, my rock ‘n’ roll memoir DIRTY WINDSHIELDS: the best and the worst of the Smugglers tour diaries is finally ready for publication for May 2017 on Douglas and McIntyre. It’s a book I’ve been working on for over ten years and I can’t wait to share it with you.

As the title indicates, this new book is a chronological compilation of my (at times cringe-worthy) journals that I scrawled out in a van during the entire run of my band the Smugglers, from 1988 – 2004. I was the lead “singer”. I’ve fleshed the book out with my recounting of the Smugglers broke and drunken story as we trekked across North America and eventually various pockets of the globe. The book recounts our failures (many) and successes (few). But still, we had it pretty good.

We had some wild times alongside bands like the Gruesomes, the Young Fresh Fellows, Mudhoney, the Dwarves, the Mummies, thee Headcoats, the Hives, the Hi-Fives, the Mr T Experience, the Queers, Supersnazz and so many more. All the sordid stories are included.

As always, I’ll be launching pre-orders of personally signed copies of the new book along with other perks, likely coming in the first week of March.

To celebrate the book release, the Smugglers are actually getting back together to perform our first hometown Vancouver show in over 13 years at the legendary Commodore Ballroom on Saturday May 13. It’s the only venue left from the gigging heyday of the Smugglers, unless you count the Hastings Community Centre. (We played in January in Berkeley, California for a Lookout Records reunion and had a great time).

We’re very proud and excited of the show we’ve put together at this iconic venue and we hope you can join us for the rock ‘n’ roll party of the year!

Tickets go on sale on Friday February 24, 2017. If you’re in Vancouver, they’re being sold at both Red Cat Records locations. If you’re thinking about coming in from out of town, we’ll have a whole weekend of really fun festivities planned to be announced soon!

It’s gonna be a real gone gasser, so hope you can join in the fun.

“Dirty Windshields should come with a disclaimer: ‘WARNING: may induce feelings of wanderlust and the itching desire to throw a guitar case into a van and hit the road.” – Will Ferguson, Giller Prize winning author

“Fucking hilarious and a joy to read.” – Allison Robertson, the Donnas