YES! The Smugglers return to rock one more time! 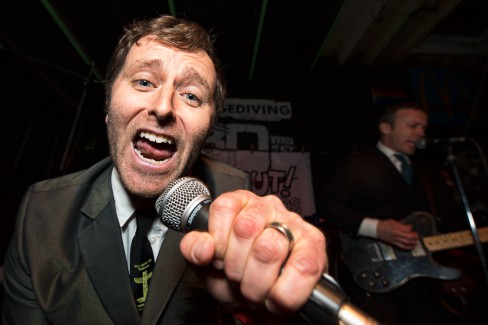 It’s amazing what can happen when you say yes. After years of dormancy, my rock ’n’ roll band recently agreed to its first gig in over a decade.

The Smugglers formed back in 1988, when my suburban high-school friends and I were inspired to start a band after sneaking into Club Soda, a downtown venue on Homer Street, to see Montreal garage-rock stars the Gruesomes.

Our first gig happened a year later, at Chicago Pizza Works. (Anyone? It was also on Homer Street, kitty corner to Club Soda, and both businesses have since been Vancouverized; which is to say, they’re long gone). From there, we played more and more shows all over Vancouver, at other hallowed, now-defunct clubs like the Town Pump, the Starfish Room, and the Cruel Elephant. The Smugglers were a mainstay at Nardwuar’s legendary series of all-ages gigs.

Soon we began to venture out of town, to places like Victoria and Calgary, and we started releasing records. By the end of our 16-year-run, we’d played hundreds of shows in such far-reaching places as Japan, New Zealand, and all through Europe and North America.

When the band finally wound down like an old dog, in 2004, our problem was saying yes to just about everything. One of our founding members finally said no. And so began a very long hiatus that, for band members and fan(s?) alike, seemed liked a permanent break-up. When anyone asked, I told them I didn’t think the Smugglers would ever play another show.

Then, this past summer, I received an email from a 19-year-old promoter named Alex Botkin, asking if the Smugglers would consider a performance. I was reminded of my own teenage self, when I would cold-call our favourite bands to ask them if they would come to Vancouver to play a show.

Alex wanted the Smugglers to reform and play with several of our former Lookout Records label-mates for the 30th anniversary of 924 Gilman, a legendary all-ages punk club in Berkeley, California. We had played it many times, and it was considered the epicentre of the pop-punk explosion of the 1990s, led by Green Day, a band that practically formed within its walls.

I sent an email to the rest of the Smugglers. To my surprise, everyone said yes. Suddenly, we were back in action, booking practices, flights, hotels, and a rental van – all for one performance. At our rehearsals, despite the epic time lapse, everything clicked. Therein lies the magic of rock ’n’ roll: There’s a special alchemy that occurs when you reassemble the exact people and parts who wrote and performed songs together. I had forgotten how exciting it could be.

The days and months passed, and suddenly we were on stage in front of a packed crowd in Berkeley. Our drummer took a deep breath and gave his drumsticks three quick clicks. Just like that, we threw ourselves into our first live performance in almost 13 years. People still danced, people still cheered, and our unique five-way chemical reaction bubbled over into 45 minutes of exhausting fun.

We couldn’t help but try to capture the energy of our past, which many times had me gasping for air and wondering if Gilman had a defibrillator on hand. When we bowed to the crowd at the end of our final song, it felt like I had been repeatedly smacked in the chest by a baseball bat. But I was happy. Really happy. I don’t know if we’ll ever play again, but here’s to the magic of rock ’n’ roll, and to the power of saying yes one more time.

Grant Lawrence’s memoir of his touring years with the Smugglers, Dirty Windshields, will be out this spring. No word on any other performances.