Our Very Own Christmas Miracle: The Night The Angel Flew 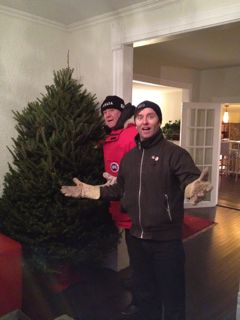 This Christmas, my wife’s family decided they would revisit their yuletides of yore, getting a REAL Christmas tree to replace their tacky plastic one. And what a magnificent tree it was… a 9 foot tall, deep bushy green, perfectly manicured, heavenly scented, Nova Scotia spruce, just waiting for us to set up and decorate, which we did, in short order, upon arriving on Christmas Eve. We carried it straight through the front door with many a curious and bundled up County neighbour looking on and waving.

We heaved the enormous tree up and into its shiny red Canadian Tire tree stand in the corner of the living room, setting the tree as straight as possible. Once we had it just about perfect, my lovely mother-in-law insisted we re-set it, as she could see “ugly writing” displayed on the Christmas tree stand. She wanted that facing the wall. No problem. Done.

Then we got to work adorning the mighty sapling with nostalgic, weird, and extremely fragile ornaments from my wife’s childhood, along with dozens of twinkling lights and streams of tinsel and popcorn. When the tree was fully loaded with shiny ornaments of holiday joy, my wonderful father-in-law reached up and very carefully, very ceremoniously, placed the last piece atop the tree… a Christmas angel, arms outstretched to us all. My wife’s family broke into spontaneous and hearty applause. Unfamiliar with this tradition, I hesitantly joined in.

Like a good son-in-law, I then offered to crawl under the tree and fill the water reservoir to the very brim, so the tree would have more than enough water to keep it green and vibrant through to New Year’s. We then filled the base of the tree with all of our wrapped gifts, brought in from across the country. We took pictures, hi-fived, hugged, and sat on the chairs and couches around the tree, admiring our work and its twinkling beauty. It could be seen clearly in the living room window for the entire neighbourhood to enjoy.

Later that night, just before the clock struck midnight, we had all gathered in the adjoining TV room to watch the classic Marlon Brando / Frank Sinatra musical Guys and Dolls. The “gangsters” in the movie were all dancing and singing in the New York City sewer, belting out “Luck Be A Lady Tonight”, cueing my wife’s entire family to spontaneously and heartily all join in and sing along loudly, swaying back and forth on the couch, while I sat in an awkward silence, staring at them.

Suddenly, from the living room, there arose a hell of a clatter. Actually more of a metallic groan which quickly grew to a screech, much like the trash compactor in Star Wars. This was followed by a very loud WHOOSH, then a shattering crash. As we all spun our heads instinctively towards the living room, the only object our line of vision allowed us to see was… the treetop angel.

She was flying! Across the living room she soared, arms outstretched, her Mona Lisa smile across her little white face, her heavenly red gown flapping like a superhero’s cape. We all gasped, realizing we were quite possibly witnessing a true Christmas miracle! Then she crashed face-first into the heating grate. As she clattered to the floor, it snapped us from our wonderment. We hopped to our feet and piled into the living room.

The mighty Nova Scotia timber had collapsed. It had unceremoniously crashed to the living room floor, taking every precious ornament of my wife’s family heritage with it. Weird toilet paper tube reindeers were flattened, wooden clothespin Santas were snapped, paper snowflakes torn. Wet spruce needles were everywhere. The several litres of water I had poured in the reservoir under the tree had toppled over as well, gushing out onto the floor, soaking the presents and threatening to electrocute anyone standing in the puddle where the Christmas tree lights now blinked pathetically.

My mother-in-law threw her hands over her mouth agape, horrified. As the ancient grandfather clock struck midnight, signaling the arrival of Christmas 2011, my mother-in-law let out an anguished scream. “CHRISTMAS IS RUINED!!!” We slowly righted the tree, as various other shiny red antique bulbs dropped from the branches akimbo, shattering loudly all around us, my mother-in-law screaming “NO!” with each additional dash of destruction.

It turned out that the “ugly writing” displayed on the Christmas tree stand was in fact the “instructions”, which we had righteously ignored. The stand was now mangled and destroyed, much like many of the precious ornaments and soaking gifts.

We quickly decided that there would be no fixing it that night, so just hours after we loaded it in, we loaded it out. The curious County neighbours looked on, wondering what the hell kind of people load in a Christmas tree at 6pm on Christmas Eve, then one minute after midnight load it right back out again, seemingly in disgust. 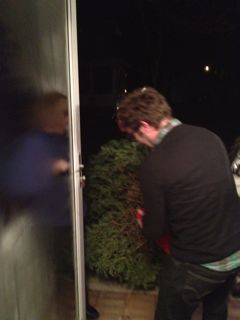 Like a good son-in-law, I stepped up, pulled on my runners and Christmas sweater and headed out to the barn, emerging with another old Christmas tree stand and a hand saw. And then… I cut the mighty Nova Scotia spruce in half… and mounted the now much smaller timber firmly into the older Christmas tree holder. 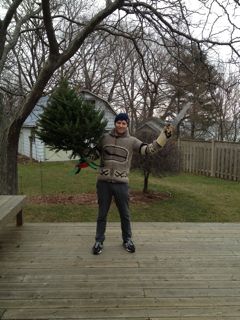 We set up 50% of the once towering tree in the living room again, decorating it with what survived the crash, my mother-in-law delighted. My father-in-law once again adorned the top of the tree with the arms-outstretched airborne angel, and we placed the drying gifts back underneath. The rest of the family arrived shortly after, not knowing the half of it. Christmas was saved, proving that, quite frankly, the TRUE Christmas Angel of 2011 actually flew in from Vancouver… and just may have the initials “G.L.”. 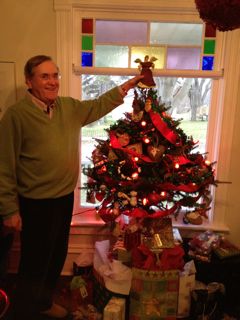 Oh, and the bottom half of the mighty Nova Scotia Spruce? I threw it in the creek. 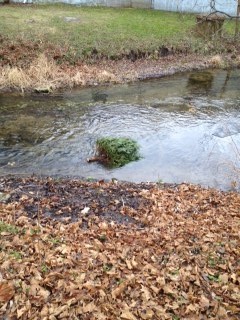