Tintin: The Movie I’ve Always Waited For… And Always Dreaded

When I was a kid, I had several ugly surgeries on my gimpy knees, meaning long recoveries in hospitals and at home. During one of these lonely, painful stretches, my Mom gave me a colourful graphic novel called The Adventures of Tintin: Tintin and the Black Island.

I was hesitant at first, wondering if it was even in English, but once I opened it up, I became hooked… for life. The action started within the first few frames, and never let up until the final frame. Here was an unassuming, polite, seemingly asexual, scrawny, geeky little guy with weird hair, kind of like… ME. He wasn’t a superhero… in fact, despite always game to fight way above his weight, he was constantly getting knocked out, beaten, shot at, poisoned, tied up, and captured, often having to be saved by Snowy, his precocious little white dog.

Tintin was a knicker-wearing crime reporter that worked out of his very modest apartment, yet travelled the world, fearlessly going head-to-head with the world’s toughest criminals in all ranges of geographic locales and conditions. And his best friend (after Snowy) was an alcoholic Scottish sea captain with a vicious temper and a mouth that would make Richard Pryor blush…. (which makes me wonder if I’ve become some sort of obsessed cross between Tintin and Captain Haddock).

My fear was that Steven Spielberg would turn the untouchable Tintin into a movie by using the same motion-capture animation used in the hugely creepy Polar Express. And would Spielberg be able to capture the subtle nuances of humour, satire, and intelligence throughout the books? Nonetheless, I found myself getting pretty excited once the previews were released, and so my 10 year old nephew Tanner (also a Tintin fan) and I were there for the North American 3-D premiere.

I can happily report that the Spielberg’s Tintin is AMAZING. It looks totally fantastic, from the very retro-cool opening credit sequence (Spielberg even uses the right font), to the stunningly beautiful segues between scenes (almost every sequence is gorgeous), to the excellent attention to detail in Tintin’s could-have-been-anywhere European city. There are plenty of early homages for die-hard fans, including iconic objects and characters from many of the books. Tintin himself looks a little less dorky and perky than he appears in the books… almost cool even… while Captain Haddock looks realistically wasted all the time.

And even though the movie is action-packed, Indiana Jones-style, I actually found myself thinking that the story lines in the books drive forward even faster than it does in this film. But once we get aboard the realistically rust stained freighter, it’s pretty much nonstop action to the end.

Another criticism is Spielberg’s unfortunate pandering to a cliched battle of hero versus villain during the climax of the film, which is drawn out and filled with over the top destruction. This was the furthest Spielberg strayed from the books, and since the climax is supposed to be the most exciting moment of any story, this was vaguely disappointing. The action sequence immediately before the finale, involving Tintin racing/stealing a motorcycle and side car through the cobblestone streets of a cliffside Moroccan village, is spectacular.

And hey, there’s even a few profound quotes wedged in between the action: trying to inspire Tintin, Captain Haddock has a rare moment of clarity through his alcoholic fog, calmly stating “a realist is just another name for a quitter”.

Will non-fans who have never read the books (aka normal dudes and girls) appreciate the movie? Possibly not. I’ve never read a Harry Potter book and therefore I have never had a shred of interest seeing any of the films, but I’m certainly glad my mom handed me that Tintin book so many decades ago… hey, I’ve even dressed as Tintin for Halloween many times over. Great snakes! 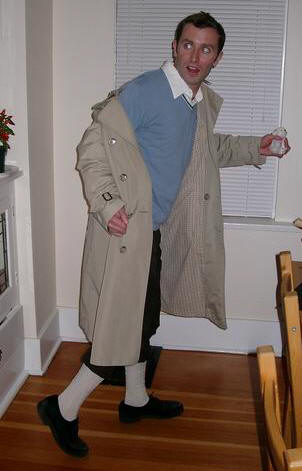 One other tip for Vancouver theatre-goers: We saw the movie in cinema 10 of Tinseltown in Chinatown, and there is a large scrape on the right edge of the screen that is easily noticed in any bright daytime scene, taking away from the amazing 3-D imagery.