5 Years of the CBC Radio 3 Podcast 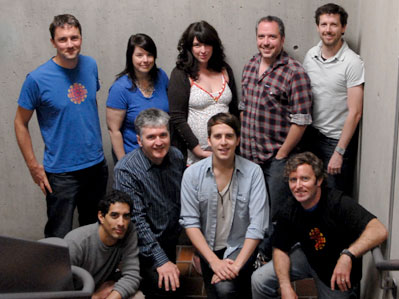 Five years ago, CBC Radio 3 director Steve Pratt (top left, blue shirt) asked me if I would take a shot at hosting a pilot for something called the “CBC Radio 3 Podcast”. And I wasn’t the first choice, either. At the time, I was hosting a national Saturday night radio show on CBC Radio 2 and I thought was that about as big as it got. I totally and utterly was not interested. Really, what the hell was a Podcast?

Steve was convincing and in charge (still is), so I did it, introducing eight Canadian independent songs. That pilot became the first episode. A couple episodes later, our friend Lane Dunlop at iTunes Canada picked it up and all of the sudden it took off, quickly becoming the #1 Podcast in Canada. It was the first music podcast from CBC, and one of the first podcasts in the world to play music legally.

Since that first episode five years ago, we’ve now made 245 weekly shows, we’ve had millions of downloads, and have spawned shows and ideas like the CBC Radio 3 Bucky Awards, the Sweatin’ to the Indies workout podcasts, the Sing For Your Song Canada Day specials and much more. Over the half decade we’ve received mail from over 60 countries in response to the thousands of Canadian artists and songs we’ve showcased.

Now the fifth anniversary show is here… and you can download from right here.

Thanks for listening! Wait… you know what a Podcast is… right?