The White Stripes slept here: an ode to my abode

Grant Lawrence in front of the Beach Park: "resort living all year round!"

It was my home for twelve years.

Last week, I signed the papers over to the new owner of my much-loved apartment on Beach Avenue, in the English Bay neighbourhood of Vancouver. The last building before Stanley Park. So ends the era of my great rock ‘n’ roll apartment.

When I first moved in, I was the complete anomaly at the Beach Park, a 1958 mid-rise building that had mostly maintained its original art deco designs. Many of the residents were original owners and senior citizens, several of them in their 80s and 90s, one even over 100 years old. For the first few years I lived at the Beach Park, when any of them met me in the hall, they thought I was either the pizza guy or a home invader.

Back then, my band the Smugglers was still a touring machine. Wherever we’d tour, we’d often crash at fellow musicians’ homes, so I tried to return the favour when bands rolled through Vancouver.

Hence, American touring musicians like Ted Leo, the Groovie Ghoulies, and the White Stripes all stayed on the couch or on the floor of my apartment at the beach. 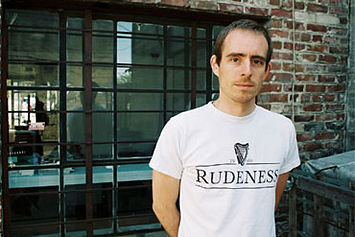 It took me under 30 seconds to walk from my front door to the best ocean swimming spot in Vancouver: Bikini Beach, historically named because when bikinis first came into vogue in the 1950s and early 60s, they were outlawed on Vancouver beaches as being too risque for teenage girls. The cool girls who wanted to wear bikinis anyway found this secret, sandy haven, hidden from the lifeguards, nestled in between English Bay Beach and Second Beach, at the very entrance of Stanley Park.

I swam at this beach thousands of times over the past decade, almost always between May 1 and October 1 (though in 2012, the latest I was in the ocean was Thanksgiving, during a particular warm spell).

Every year for eleven years I hosted a Winter Solstice / Christmas party, packing the tiny 700 square foot space with as many friends and members of the local music community and members of my hockey team as I could.

I am a great lover of live music, so over those years, I am extremely thankful to have had many musicians perform acoustically beside the Christmas tree in the living room, including: Said the Whale, the Matinee, Treelines, David Vertesi and Hannah Georgas, Cuff the Duke, the Choir Practice, Backpack Yoda, the Gay Straights, Reid Jamieson, and Dan Mangan.

Dan Mangan’s early living room performance of “Robots” has become so legendary it even got written up in SPIN Magazine.

In 2008, things changed radically in the little Beach Avenue apartment when my then-girlfriend, now-wife, Jill Barber moved across the country from Halifax to finally put a firm feminine touch on what I had always considered to be the perfect bachelor pad. (Speaking of pads, I used to dry my goalie pads in the oven before Jill moved in).

Jill eventually renovated, overhauling the original 1950s faded pink bathroom and linoleum-centric kitchen. She also got rid of a lot of my decrepit furniture, much of which was passed down from my grandparents, and much of which dated back to the 1930s when they immigrated from Scotland. Their old bed we shared for months was so tiny we nicknamed it “The Scottish Squeeze”.

Jill is a singer-songwriter, and so began a whole new era of Canadian singer-songwriters either sleeping over on tour stops or just coming by for dinner, including Joel Plaskett, Sarah Harmer, Rose Cousins, David Myles, Old Man Luedecke, Jeremy Fisher, In-Flight Safety, Jill’s brother Matthew Barber, and the entire staff and touring crew of the Vinyl Cafe.

If my elderly neighbours ever knew that the legendary Canadian raconteur Stuart McLean was in our building, it would have started a riot, like a cross between Cocoon and A Hard Day’s Night.

And so that’s it for the little Beach Avenue abode. No more walking across the street for a swim after work, no more cycling the seawall to the CBC, or shooting a round of beer-golf at the pitch and putt. And no more parties.

Jill and I have now begun a new, much more laid back chapter of life in East Vancouver, but I will never forget that fabulous decade at the Beach Park, the last building before Stanley Park, in the little rock ‘n’ roll apartment.

Jill and Grant at the final Xmas party at the Beach Park. Photo by C. McAvoy.

Thanks to Christine McAvoy for the great photos!