In the late 1980s and into the early 1990s, on Saturdays, I would take the bus into downtown Vancouver to shop for records, on a weekly journey of musical discovery.

Back then, there were plenty of new bands that I simply had to take a chance on to find out if I liked them or not, which was an expensive gamble for a teenager. I developed a system of trust that was based on what indie label the record was on, and it worked like a charm for years.

I had my favourites, like Sub-Pop from Seattle, K Records from Olympia, Og Records from Montreal, Dischord from Washington DC, Norton from New York, Hangman from Chatham England, and Sympathy for the Records Industry from Los Angeles. But my very favourite record label, the one I would get the most excited about when I flipped over the record and saw that logo (above), was Lookout! Records from Berkeley, California.

I LOVED the punk rock energy of the records that came from that label, from bands like Screeching Weasel, the Queers, the Ne’er Do Wells, Green Day, Pansy Division, Operation Ivy, and the Mr. T Experience. It was pop-punk, mostly based in what the Ramones had blueprinted, but sonically advanced through much more audible singing; sometimes angry, sometimes funny, but always stressing melody, melody, melody, with more hooks than a Desolation Sound tackle box.

We were thrust into an incredible community of bands who welcomed us with open arms (mostly because we always brought the party) as we joined an independent record label at its very height, run by a creative nucleus that included Larry Livermore, (one of the most influential figures in the American indie underground), Chris Appelgren (the artist who created many of the most iconic Lookout logos, covers, and artwork), and Molly Neuman (the woman who co-founded the riot grrrl movement a few years earlier in Olympia).

We’d take part in star-studded Lookout! Records showcases at music events like the CMJ Music Marathon in New York and South By Southwest in Austin. The Lookout showcase would be the hottest at the festival, always selling out with a line around the block.

The stack of bands would include The Queers, the Mr. T Experience, cub, Pansy Division, the Hi-Fives, and the Smugglers, and a full-on raging rock ‘n’ roll party would erupt for five hours on stage to a riotous crowd. In later years, we’d be joined by the Groovie Ghoulies, the Criminals, the Donnas, and Ted Leo and the Pharmacists.

Lookout Records showcases in New York would always attract all sorts of luminaries, such as Joey and Johnny Ramone, Joan Jett, Bob Mould, Kim Fowley, Lemmy from Motorhead, William Shatner, and various Saturday Night Live stars, making us performers on stage pretty much just as starstruck as those in the audience.

Having Lookout’s trademark of quality on the back of our records was the turning point in our “career”, launching us way beyond Canada for successful tours across the USA, Europe, Japan, Australia and New Zealand. Just like the “Mint Records Effect” in Canada, all international promoters needed to hear was “Lookout Records” and we’d get the show/the tour/the guarantee.

We eventually released three full length records (Selling The Sizzle, Rosie, Mutiny in Stereo), one live album (Growing Up Smuggler), one EP (Buddy Holly Convention) and one split EP (Summer Games, with the Hi-Fives) in our ten year span on Lookout.

Today, while working on my new book in France, I found out through Ted Leo’s blog, that after 24 years, Lookout Records has officially called it quits.The label hasn’t released a new record since the late 2000s and was existing only on back catalogue, but apparently that has also ceased as of the end of 2011.

So… thank you Lookout Records for making a teenager’s dream come true. It was one of the most exciting, visceral periods of my life so far, and whenever I see that classic logo I’ll always remember the good times. 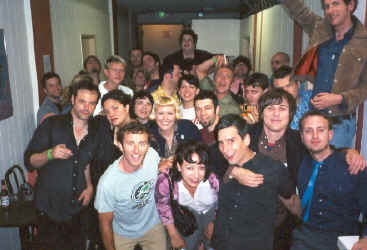