New Brunswick! The Epic Journey There and Back Again 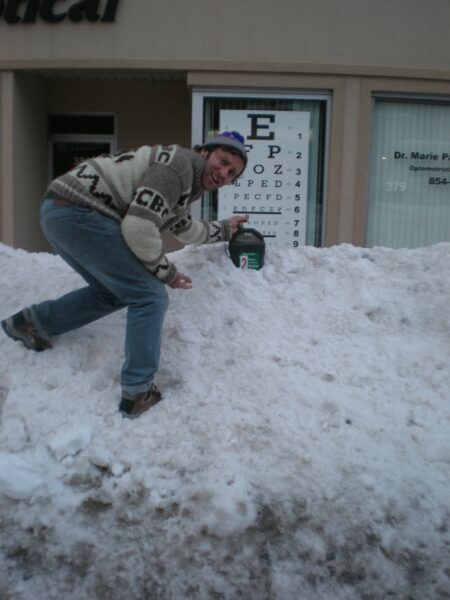 Whoa! I had an amazing time in New Brunswick, first in Fredericton (Freddy Beach!) for the inaugural Shivering Songs Festival, hosted by the Olympic Symphonium, and unbelievably good band. In fact, I saw so much good music in such a short time that I was left fully impressed and blown away by the strength and quality of the New Brunswick music community. And I LOVED being storyteller on the Songwriters and Storytellers Circle at the gorgeous Wilmot Church! And I got to check out the Capitol Bar! Thanks so much to Kyle and the Olympic Symphonium for having me.

On Sunday afternoon, after a wonderful Bluegrass Breakfast at the Snooty Fox in Freddy, my good friend and talented musician David Myles and I hit the road to Moncton, a town that was one of the world hot-spots for The Smugglers; wild shows would always ensue. The book event was held at Marky’s Laundromat and Espresso Bar, a fantastic little hangout run by one of the legendary Leger brothers, one of the coolest rock n roll-loving families in Canada.

In both cities I met a tonne of fantastic people from all over the place. Cheers to my old pal Ken Kelley for bringing me back to Moncton, to Marky for hosting, to David Myles for performing his perfect songs to compliment the stories, Martin and Moe for making the trip from Charlottetown, to Adam for making the trek from Freddy for a double-dose in Moncton, to Ray from Saint John for all the Moosehead Brewery loot. Back in Freddy, thanks to Zach and Fergus at the Capitol Bar for treating me like a king, to all the very kind musicians, Westminster Books in Fredericton and Chapter’s in Moncton, and to all the local publications in both towns for the great ink! Much appreciated, see you again!

Next up: Picton, Ontario in Prince Edward County in two weeks!

Well I guess you could say all the scooting around Canada in winter finally caught up to me. After  an eight province, 30 city national book tour over the past four months, through remarkably smooth travel conditions, I finally got torched by the Canadian winter, and one of our fabulous airlines.

It all came crashing down on Sunday night, after a fantastic couple of New Brunswick book and music events in Fredericton and Moncton. First, I found out my flight out of snowy Moncton was delayed by two hours (eventually it would be close to four hours) which meant I missed my connection in Toronto to get me home to Vancouver. Major bummer, but merde happens, and I figured I could spend the night with my “in-laws” in downtown Toronto.

As I stumbled from the plane at 1:30am in Toronto, I was greeted by a friendly airline agent who joyfully apologized for my “interrupted trip” and informed me that a free hotel room had been reserved for me in my name, right beside the airport, along with a breakfast and dinner voucher, and shuttle service, no need to travel to and from Toronto.

Great, I thought, easy for me! Little did I know the hell in store… the shuttle didn’t come around the airport to pick me up until about 2:30am, and then led me 20 minutes from the airport, through industrial wastelands, to a seedy, shoddy, fleabug crackden of a hotel. The lobby was filled with reprobates, drug dealers, and douche bags, the halls littered with trash, random doors of rooms open ajar or wide, displaying deplorable rooms.

My room was over-the-top disgusting, with food remnants on the floor, dirty sheets, threadbare towels, hair in the sink and tub. But it was now 3:00am, what choice did I have? I was also frightened to go back in the hallway as I could hear screaming, fighting, and breaking glass. I’m not sure when I actually fell asleep, but it was to the hellish rhythm of random obscenities shouted in the hallway and weird creatures biting my entire body.

When I went down to the lobby in the morning to catch my shuttle, I was informed that I had arrived too late to cash in the dinner voucher and was leaving too early to cash in the breakfast voucher. No worries, as the breakfast buffet looked like ground zero for swine flu.

SO… um… have the airlines been reading my tweets?!? If so… touché. You certainly stuck to me on this night!