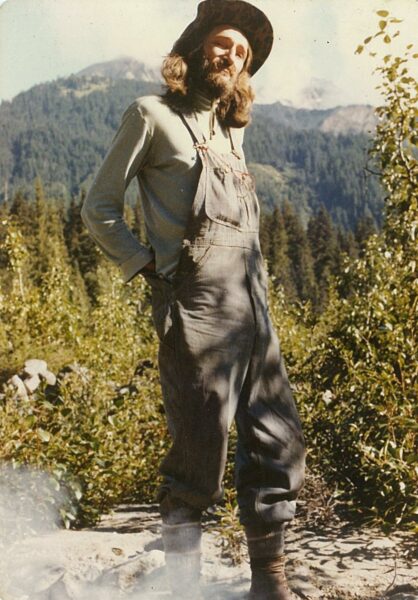 This is just want Russell looked like when we first met him in Desolation Sound.

One of the most common questions I get asked at the Adventures in Solitude book events is “whatever happened to Russell?” (if you haven’t read the book, “Russell” is one of the primary characters, a hermit we found living in a musty canvas tent beside our Desolation Sound cabin many years ago, who eventually became a good friend).

My answer is always the same: Russell is getting older, but doing well, driving his taxicab around Powell River, living the life he wants to lead, up at the end of the road, spending as much time as he can around his little home, with his beloved dog Lucy. On Tuesday nights he can be found at the Lund Hotel Pub playing euchre and sipping on a pint of Guinness.

Just the other day, I called Russell on the phone to see if he needed any copies of the book for Christmas presents. He almost never answers the phone, so I was surprised when after just a couple of rings I heard a cheery, creaky old “hello!” at the other end of the line. We chatted for awhile, and I asked him repeatedly how he was doing, and each time he answered “oh, fine, just fine”. I asked him if he had been receiving much feedback on the book, to which he answered “oh yes, everyone is coming up and talking to me about it, everyone seems to really like it”. I asked him how he felt about that, to which he answered “it’s ok, but you know me, I’m a pretty private person, I don’t want too much attention”.

Then shortly after he told me he was driving a couple of people around in his cab and they said “hey, are you the ‘Russell’ from that new book?” Russell then told me with a chuckle “they thought it was pretty cool when I said ‘I sure am!’”

So, if you ever find yourself in the Lund Pub on a Tuesday night, be sure to buy my old friend Russell a pint of Guinness or a glass of red wine. Is there a “Russell” in your life?